This temple is one of the oldest Narashima Temple in Chennai Region. And the day to day activities are all carried by the trust without any small deviation. The trust maintains the Temple very clean and neat. All the devotees are treated as one and there is no difference between rich & poor.
Once you enter the temple, you will fell to the blessing of the Lord Narashima. The belief of this temple is that those who visits this temple for consecutive “Pradhosa Pooja” will be given the full blessing of the lord and their wishes will be granted.
As per the ASI, researches have revealed, the small place of Nanganallur had existed even during the 8th century A.D., It was also chosen by the Pallava monarchs of Kanchipuram as a site for a number of sprawling Vishnu temples. Several artifacts had been excavated that include a beautiful stone image of Lord Narayana, about five and a half feet in height portrayed in a typical Pallava style. An image of Goddess Bhudevi, with a bell, a plate and a lamp is extremely captivating. The metal bell found here with the imposing image of Goddess Bhudevi is a unique one, since the top of the handle contains the images of Sudarsana (the discus of Lord Vishnu) and Panchajanya (His conch) one inlaid within the other. Normally they are found on either side of the top portion of a bell. An inscription in Tamil datable to the 10th century A.D. discovered at this ancient place has the detailed description of the registration of the gifted land for meeting the expenses of lighting two lamps everyday.
The main sanctum, facing east enshrines the imposing image of the principal Deity, Lord Lakshmi Narasimha. The other murtis, which adorned the beautiful main sanctum are those of Lord Pradosha Narasimha, for whom special worship is performed during every pradosha as The Lord performed the Killing of the King Hiranyakasibu (Father of Prahalad) and Sri Chakrattazhvar (Sudarsana).
The interesting and rare architectural feature of this temple is, the sanctum sanctorium is designed in circular shaped pillar which resembles a stambha from which Lord Narisimha emerged to protect His child-devotee Prahlada.
The shrine housing the image of Lord Sri Sudarshana with Lord Narasimhar at the back is designed like a chariot, circular in shape. The vimana is one of the chief interests about the temple and is known as Veda chakra Vimana. Interestingly, the “prayoga chakra` (the discus held by Lord Narayana just prior to release) of an old Pallava Vishnu image which was earlier excavated here, has been installed in front of the Chakrattazhvar shrine, which has enhanced the traditional grandeur of the temple. This exceptional Vishnu image is properly mounted on a small structure, enabling devotees to actually touch it and pray for their wishes.
Apart from the above mentioned sub shrines, there is another significant sanctum stationed in this temple, which is dedicated to Lord Navaneeta Krishna. Here, the main image holds a ball of butter in His right hand while His left hand holds the conch.  According to stories since Krishna was the eighth child of Vasudev and Devaki and hence, the shrine dedicated to the Lord is octagonal in design.
Also erected in this temple is a separate sanctum for Lord Srinivasa, whose image is guarded with the tall dvajastambha.
There is a sanctum dedicated to Lord Kothandarama with Sita Devi, Lakshmana and Hanuman. Directly in front of Lord Rama`s shrine and inside the prayer-hall is erected a small image of Hanuman called Bhaktakoti Anjaneya or famously known as “Visa Anjaneyar”. It is a belief, that those who pray with this Anjaneya will get Visa to US.
The devotees are permitted to offer and apply butter on the image, while praying for the fulfillment of their wishes. Outside the prayer-hall and facing the shrine of Lord Rama is another Anjaneya called “Sanjeevi Anjaneya”. His Right hand held aloft (Carrying Position of Mountain Sanjeevi) 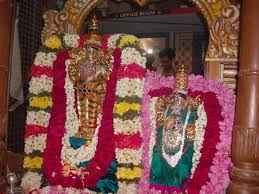