This Hindu temple is located in Nanganallur, Chennai and is dedicated to Lord Shiva.
According to the historical legend, an old man once tried to clean the tank or pond in his land. While cleaning, he found idols of the temple in the tank submerged and buried. These idols were immediately cleaned and moved to a tent with a thatched roof. At the beginning, worshipping of these idols began by the lighting of lamps. The Hindu temple was built later on.
As the deity’s idol was under water for a long period, he is known as Jalakandeswarar( Jal standing for water). Later on the name was changed to Arthanareeswara. Arthanareeswara is the form of the supreme being representing both male and female forms at the same time. The devotee worshipping the Linga found at this Indian temple, accept the concept of worshipping Shiva and Devi together.
The temple faces east with a spacious Maha Mandap, Bali Peeta and Nandhi Mandap. The Shivalinga is big in size compared to normal Shiva temples in India, with a radius of 3.5 feet which is mounted on a platform.  Out of many forms of  Lord Shiva , Arthanareeswara belongs  to satyojatham which  faces west.  The mother goddess Tripura Sundari is found at a separate shrine, next to the lord facing south.  The Navagraha ( 9 planets/sun ) shrine is nearby.
In this temple, devotees can also find the Sri Ashtabuja Durga idol which is big (8 Ft. Tall). 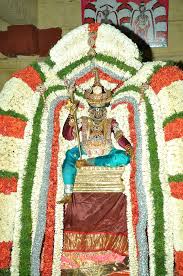