In Nanganallur area there are many old famous temples to see. Sri Rajarajeswari temple is one of the oldest temples and the area is named after the name of this Goddess as Nanga Nallai (place of good-natured women) which is now called Nanganallur. This is a private temple also named as Sri Rajarajeswari ashram. This temple having two floors is located at 16th street at ThillaigangaNagar. The temple is facing east, but has entrance from north. At the entrance Prakara, the idols of Astadikpalakas are seen. After the entrance there are two shrines—one for Lord Dattatreya and another for Lord Bhairava. On the ground floor the temple for Sri Lakshmisametha Satyanarayana Swamy is seen. Here the image of Lakshmi is seen on the chest of Perumal. Many devotees perform Satyanarayana Vratham here. Unlike in other Vishnu temples here the idols of Navagrahas are seen on the wall in a straight line. The devotees should go around the temple in anti-clockwise direction. First they should have the darshan of Vinayaka and Durga. Later they should see the main presiding Goddess who is seen on the second floor. The statues of Shankanidhi and Padmanidhi are seen at the entrance of the steps. One has to climb 16 steps to enter the sanctum and climb down sixteen steps from the other side to leave the place. While coming down one can see the fifteen stucco idols of Thithi Devatas (representing fifteen lunar phases and fifteen letters of Mahashodasi mantra) on the wall with Agasthya Muni’s hymn engraved below each idol. The main idol of Rajarajeswari is seen in sitting posture on Meru Yantra wielding a discus,a conche, a sugarcane bow and flower-arrows in her four arms. Decked in costly jewels and ornaments she looks very beautiful in the glow of oil-lit lamps. She is flanked by Lakshmi and Saraswati on one side and by Ganesh and Murugan on the other side. Subshrines of Matangi and Vaarahi are seen on either side of the sanctum. Fifty-one Shakti Yantras are installed in this temple which makes this place equal to fifty one Shakti Pithams seen in India. The main idol is self-manifested from the sacrificial altar in the form of glittering stones when Sri Rajagopal Swamigal was performing Homam at his house in Georgetown on Navarathri Friday in 1957. As per the advice of Kanchi Paramacharya, Sri Chandrasekhara Saraswati, he installed them in the present place after getting them carved into idols.  Here poojas are done according to Srividya tradition. So only persons specially trained under Swamy are allowed to act as priests. Here many devotees perform Kumkuma Pooja. They have to buy Kumkum sold by temple people. Kumkum from outside is not allowed. The kumkum packet should be dropped into a box after mentioning one’s name, birth star, janma thithi and one’s wish before ascending the steps. There is Varuna Dhanvantari theertham in the form a well within temple premises. The water from this well is said to have powers of to cure health problems. It is believed that Rajarajeswari in this shrine was worshipped by Sage Agasthya and Thirumoolar. The rays from the sun touch the holy feet of the Goddess for six days in the early morning time during the month of Masi or Magha . Special poojas are done during this time. The temple timings are from 6.00 a.m to 12.00 noon and 5.30 to 8.45 in the evening. You will experience the benign presence of Mother everywhere in the temple. To reach this temple one has to get down at Palavanthagal railway station. 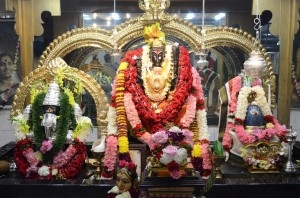